Despite concerning acceleration in home prices since last summer, consumers are still eager to buy, and an increasing share of homes are selling over the asking price. In May, S&P CoreLogic national Case-Shiller Index skyrocketed 16.6% year over year — keeping with the theme of reaching new highs in the past few months. The month-to-month index shot up 2.14%, making it the fastest April-to-May increase since the data series began.

Acceleration in home price growth and mass vaccinations earlier in the spring has prompted more sellers to list their homes. This has been helpful for buyers after months of decreasing new listings and intense competition for dwindling for-sale homes. The imbalance between robust demand and dismal availability of for-sale homes has led to a continual bidding over asking prices, which reached record levels in recent months. Now, almost 6 in 10 homes listed are selling over the asking price. Nevertheless, with more new listings and new home construction, home price acceleration that has built momentum, and continues to reach new highs, will likely slow later this summer but remain in double digits. 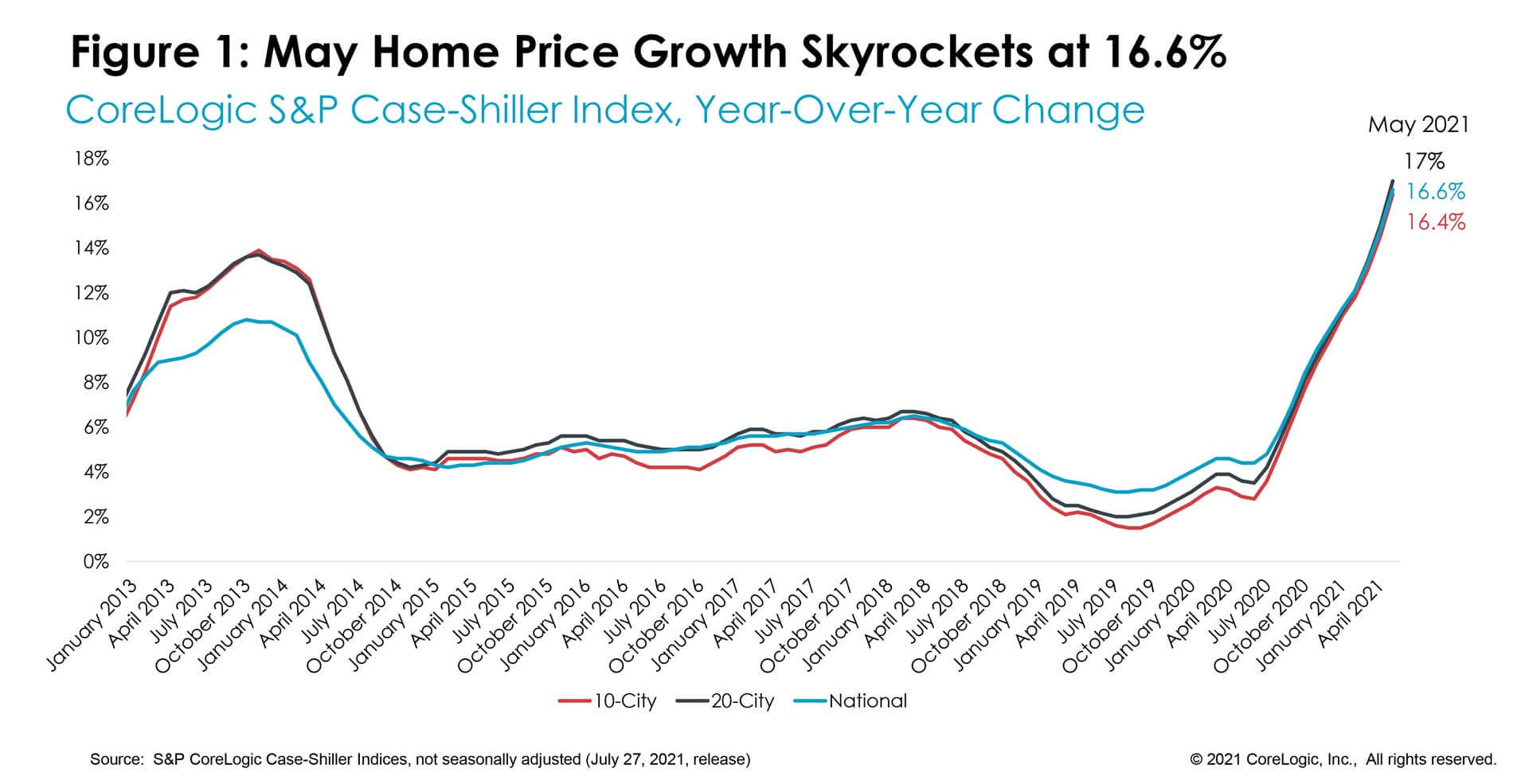 There has been almost no change in the ranking of metropolitan areas by price growth over the last year. For the 23rd consecutive month, Phoenix had the strongest home price growth among the 20 markets, taking off 25.9% in May, the fastest acceleration since the spring of 2006 and 17-percentage-points higher than last May’s growth.

San Diego remained in second place, with an annual increase of 24.7%, and a larger jump of 19-percentage points from last May. Seattle, in third place, had a 23.4% jump in May. All 20 cities in the index had double-digit home price growth in May.

Chicago and Minneapolis continued to lag, up 11.1% and 12.8%, respectively. Chicago has been ranking the lowest in price appreciation in the past three months’ releases. However, Minneapolis had the slowest acceleration in price growth compared to last year (Figure 2). 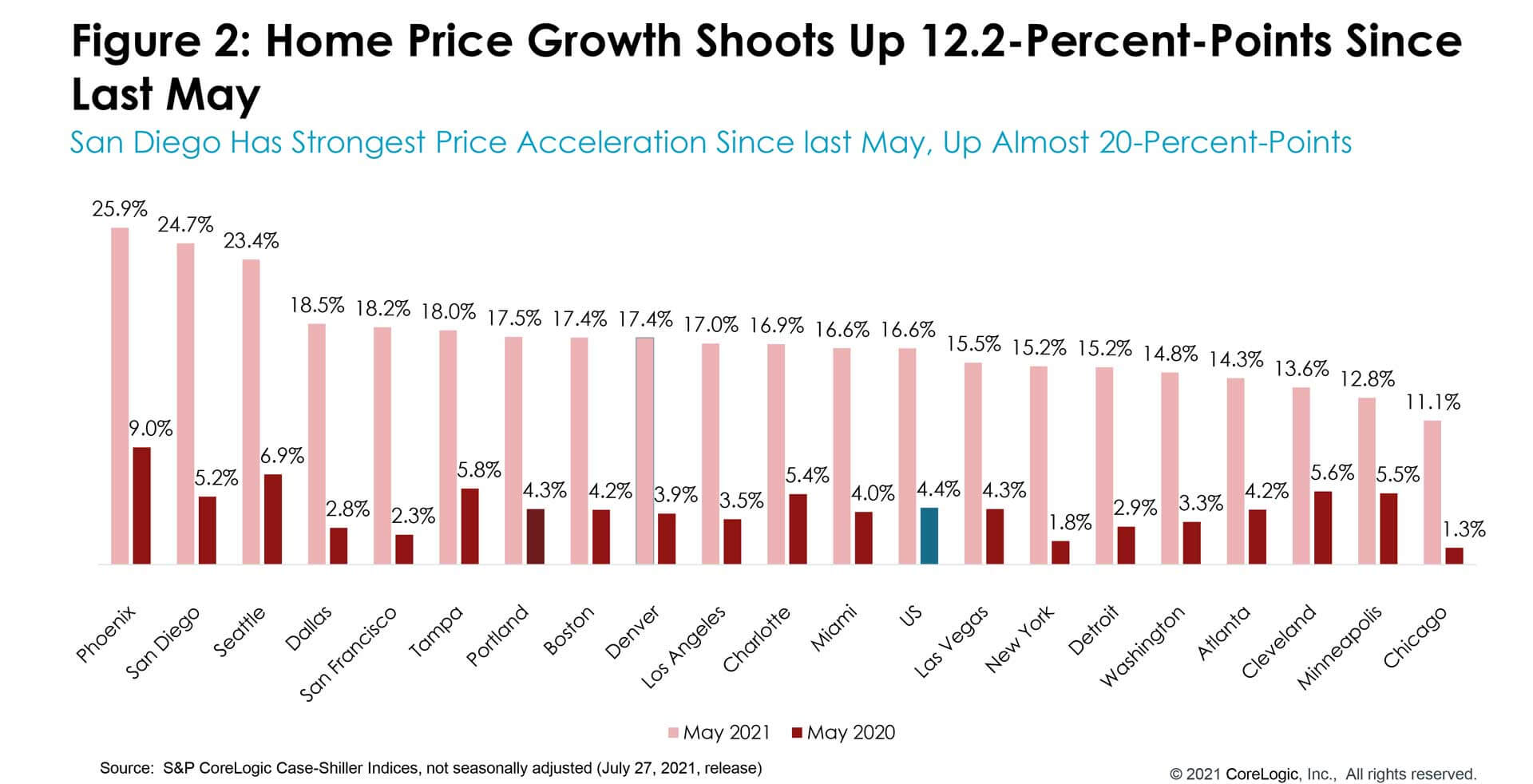 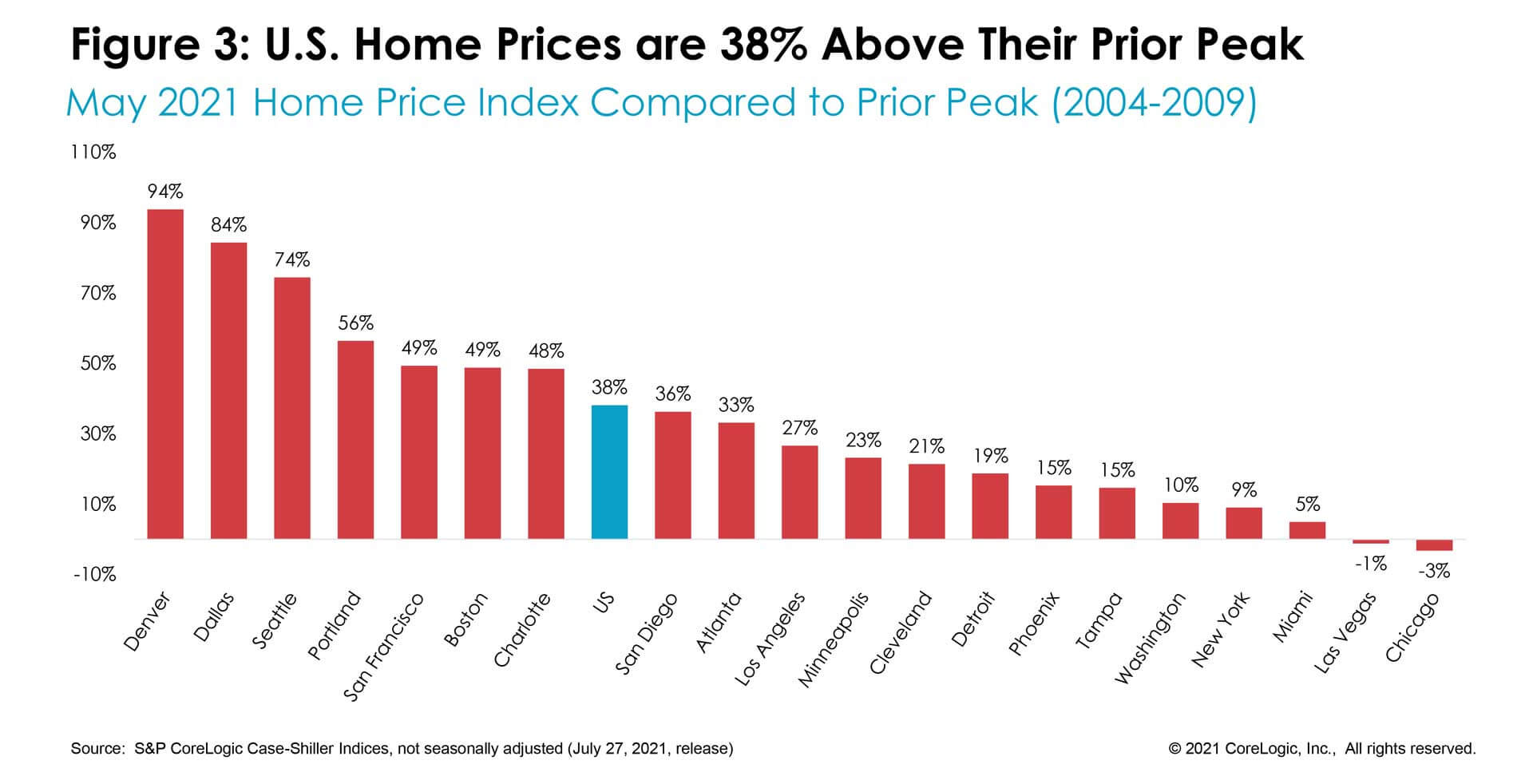 Home price growth between the low tier and high tier continued to converge, narrowing the difference between the two tiers to a two-decade low. This convergence occurred as demand for homes in all price segments picked up pace since the onset of the pandemic, but particularly due to heightened demand for higher-end homes since last summer.

Prices of homes in the lower one-third of the price distribution jumped on average 18.5% in May. The fastest price growth in the low tier was in 2013 when the growth rate reached 25% as investors were snapping up foreclosed properties post-Great Recession. The average growth among medium-tier priced homes followed at 18.1%, while prices in the highest tier were up 17.5% on average, making it the strongest home price growth recorded for the two tiers in the history of the series (Figure 4). 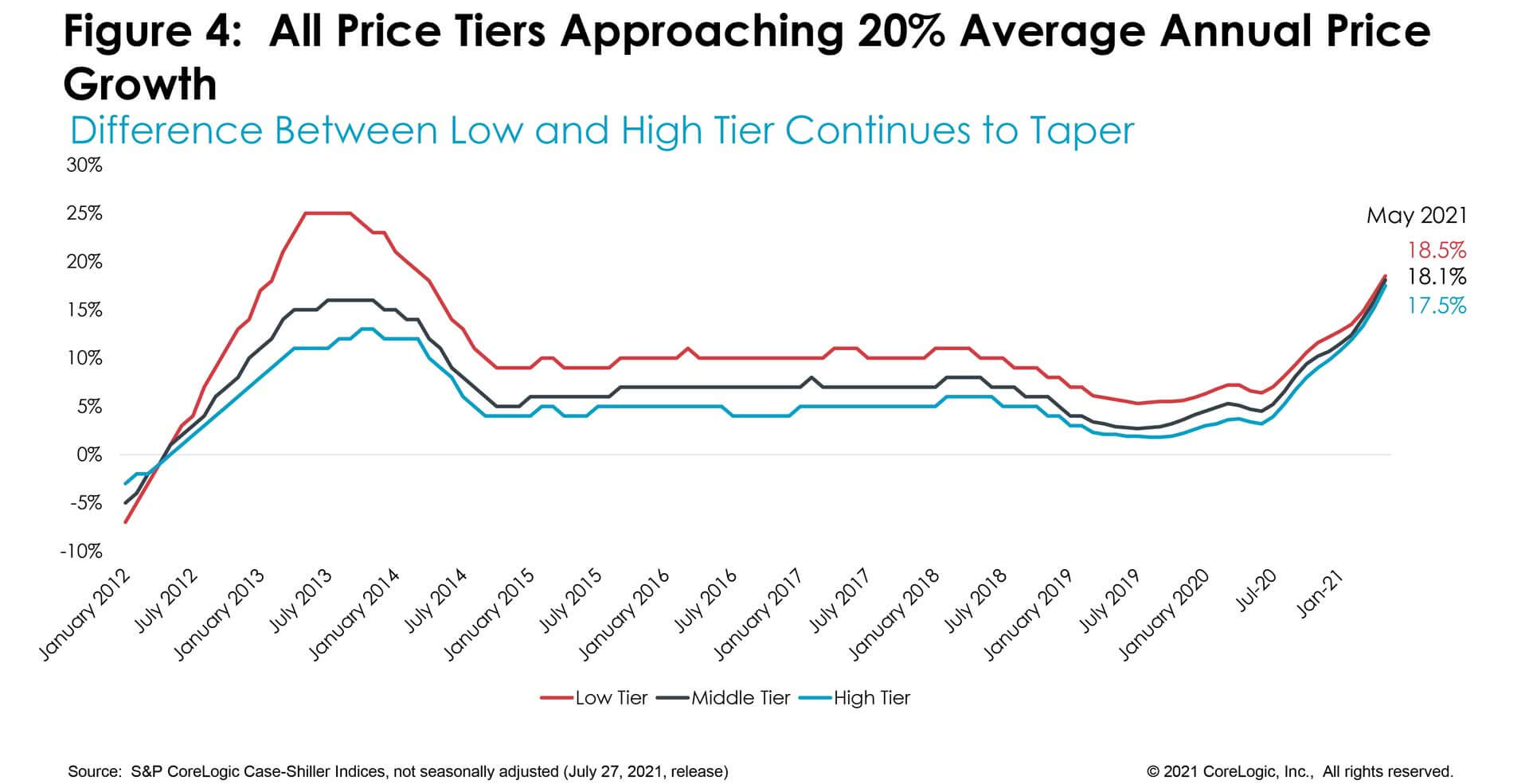 Lastly, the month-to-month changes in home price growth have revealed some interesting buyer preferences. The high tier growth rates have been picking up pace in recent months. However, this tier appears to have peaked in March with an average monthly increase at 2.7% among the 16 cities that report prices by tier. In May, the high tier’s monthly increase averaged 2.5%. The low tier’s monthly growth has also slowed from an average of 2.46% in April to 2.2% in May. Nevertheless, the monthly increases are still notable, and we may see a pick-up in the coming months.

The largest home price increases in the lower one-third price tier were in Phoenix at a 3.5% increase from April to May, followed by Tampa at 3.2%. In March, the city with the strongest growth in the low-tier was in San Francisco at 3.5%, but slowed to a 1.9% increase in May.

In the high tier, Phoenix again took the lead with a 4% increase from April-to-May, followed by San Diego at 3.3%. In March, Seattle was leading with a 6.2% increase in the high tier and has since slowed to a 2.9% rise (Figure 5). 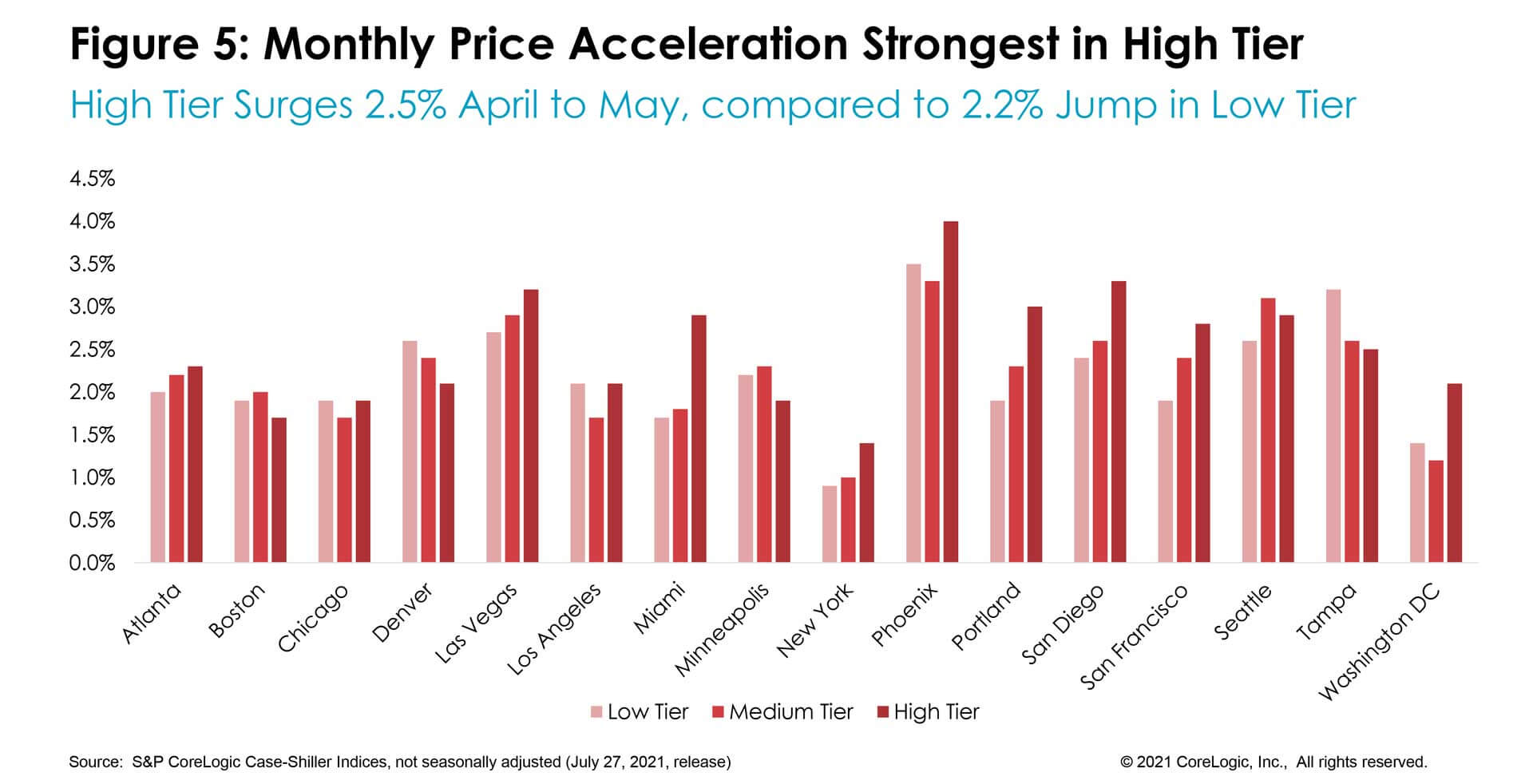 While sustained spurts of home price growth are keeping economic watchers on their toes, underlying strength in consumer demand remains supported by a significant pool of accumulated savings and solid mortgage underwriting. Both are markedly different than home price run-up seen in 2005. Nevertheless, improvements in the availability of new listings will help release the tremendous pressure that competing buyers have put on home prices and home price growth, which is likely to slow some by the end of the summer. 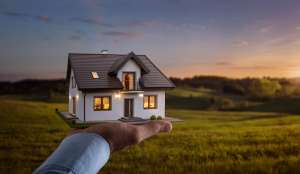 What Other Challenges Exacerbate the Affordable Housing Crisis? 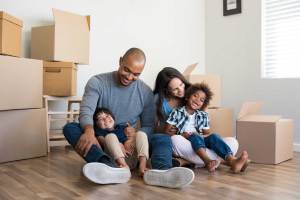 How Homebuyer Migration Changed in 2021 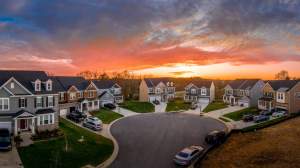 National home prices increased 18% year over year in July 2021, an all time high.

In this episode, host Maiclaire Bolton Smith is joined by the Appraiser Coach, Dustin Harris. He discusses the value of truth, the impact of appraisal bias and reveals the secret to increasing the appraised value of a home.