In March 2021, 4.9% of home mortgages were in some stage of delinquency (30 days or more past due, including those in foreclosure)[1], a sharp decrease from February 2021 according to the latest CoreLogic Loan Performance Insights Report . The 0.8 percentage point decrease in the delinquency rate from February was the largest since the start of the pandemic and could be partly attributed to the largest one-month increase in employment since August 2020.

The serious delinquency rate — defined as 90 days or more past due, including loans in foreclosure — was 3.5% in March, roughly three times that of a year earlier, but down from a recent high of 4.3% in August 2020 and from 3.7% in February 2021. The CARES Act provides relief to mortgage holders and has worked to keep delinquencies from progressing to foreclosure and therefore the foreclosure inventory rate — the share of mortgages in some stage of the foreclosure process — remained low at 0.3% in March 2021, down from 0.4% from March 2020. The decrease in the serious delinquency rate from the August high and increases in home equity as prices continued to increase in 2021 lessen the likelihood of a foreclosure wave later in the year when homeowners emerge from forbearance. 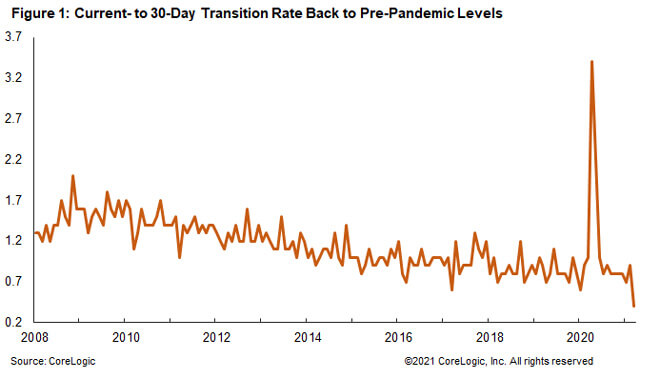 The share of mortgages that transitioned from current to 30 days past due was 0.4% in March 2021 — a decrease from the peak of 3.4% in April 2020, and the lowest rate recorded for this measure.[2] Low transition rates indicate that while the rate of mortgages in any stage of delinquency remained elevated, fewer borrowers slipped into delinquency than early in the recession. 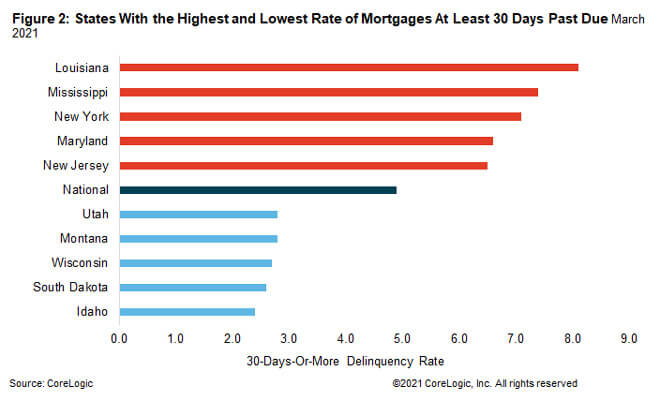 Figure 2 shows the states with the highest and lowest share of mortgages 30 days or more delinquent. In March 2021, that rate was highest in Louisiana at 8.1% and lowest in Idaho at 2.4%.  All U.S. states posted annual gains in their overall delinquency rate in March 2021, and places with large job losses during the last year experienced large increases in delinquencies. Hawaii and Nevada, both of which rely heavily on tourism and the hospitality industry, had the largest 12-month spike in delinquency rates, increasing 3.2 and 3 percentage points respectively. These states also had large increases in unemployment rates during the pandemic, and the unemployment rate for Hawaii was the highest in the nation in March 2021 at 9.1% compared with 6% for the U.S overall. Figure 3 shows the 30-plus-day past-due rate for March 2021 for 10 large metropolitan areas.[3] Miami had the highest rate at 8.1% and San Francisco had the lowest rate at 3%. Miami’s rate increased 2.9 percentage points from a year earlier. Outside of the largest 10, 94% of metros recorded an increase in the overall delinquency rate. Oil-reliant Odessa, Texas, experienced the largest annual increase with 7.9 percentage points — the unemployment rate in Odessa increased to 10.6% in March, a 5.8 percentage point increase from the prior year.

Mortgage delinquencies showed the largest one-month improvement since the start of the pandemic in March as the U.S. job market improved. While the overall delinquency rate and serious delinquency rate are elevated compared with the pre-pandemic period, early delinquencies were low in March, and the current-to-30-day transition rate dipped to the lowest level recorded. Continued improvements in the economy and job market this year will help borrowers remain current on their payments when forbearance is lifted later this year.

Why Is the US Not Experiencing the Price Declines Seen in Other Countries?

We Buy, You Buy, iBuy: PropTech Finds Its Place in Traditional Real Estate

While options like iBuying should not be overlooked, it can also be helpful to consult a real estate agent because they can offer advice that stems from learned experience.